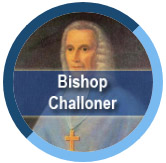 1691   Bishop Challoner was born in Lewes to a Protestant Cooper (barrel maker).

After his father died, whilst still an infant, Richard moved to Firle, home of a Catholic family where his mother was employed.

1705  Aged 14 Richard went to Douai College, France. He did not see his beloved mother for 12 years.

1720  Aged 29 Richard was made vice president of Douai College.

1727   Richard presented his Thesis and is made Doctor of Theology.

1730  Richard left Douai and returned to England to start his missionary and pastoral work.

Though the penal laws were no longer enforced with extreme severity, the life of the Catholic priest was still a hard one. Disguised as a layman, Richard Challoner ministered to the small number of Catholics, celebrating Mass secretly in obscure ale-houses, cockpits, and wherever small gatherings could assemble without exciting remark. Richard would wear a brown suit and was often referred to as Mr Brown.

1734   Richard was appointed as Vicar General of London district, where 25,000 Catholics were secretly practising their faith.

As Richard was not allowed to preach in public, he often preached at the chapel of the Sardinian Embassy.

1745   Richard embarked on prison work, visiting and ministering to prisoners and their families.

1748  Richard starts translating Douai Bible. He also translated prayer books that had previously been in Latin so that they were accessible to the poor.

1759   Richard was spending most of his time in London. He regularly preached in a hired room at The Ship Tavern, Gate Street, Holborn, in secret. The pub still exists today.

Towards the end of Richard Challoner’s life the penal laws which had, for so long oppressed Catholics in England, began to be lifted through what were called the ‘Relief Acts’.

1780  The Gordon Riots. Sadly there remained a minority of fanatics who bitterly opposed the easement of the Catholics. They tried to prevent parliament from passing the new Act intended to restore increasing normality.

Chief among these fanatics, and most skilled at striking up violent hatred, was Lord George Gordon, who organised his mob to stop MP’s from entering Parliament to pass the new law.

Riots broke out and widespread violent destruction took place for nearly a fortnight throughout London.

The chapels and houses of Catholics were wrecked and plundered by frenzied mobs. From his hiding-place the bishop, now nearly ninety years of age, could hear the howls of the mob, which were searching for him with the intention of dragging him through the streets. They failed to find his refuge, and on the following day he escaped to Finchley, where he remained till the riots came to an end. But he never fully recovered from the shock.

Richard returned to 44 Gloucester Street later in 1780 where he became increasingly frail.

Richard was buried in the church vaults in the grounds of Milton Manor, the home of his good friend Brian Barrett.

1946  In May Richard’s body was transferred to Westminster Cathedral under the direction of Derek Warlock who would later become Bishop of Portsmouth. It was he who gave this school the name it proudly bears.

Bishop Richard Challoner’s remains are there in a chapel dedicated to Saints Gregory and Augustine. The late Cardinal Hume has since been buried beside him.

and for the many gifts you have given us.

Bless the students, staff and governors of our school and their families;

deepen our faith and help us to grow in love of You and of one another.

Give us the grace to follow the teaching of Bishop Challoner

and to strive to do ordinary things extraordinarily well.

We ask this through Christ our Lord.  Amen.