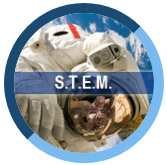 STEM stands for Science, Technology, Engineering and Mathematics. It looks to bring together the ideas from the 4 subjects and combine them. It can be delivered in many ways from a STEM club to organised activities.

Why is STEM important?

STEM is important as the 4 subjects underpin the world in which we live in from managing natural disasters to everyday issues such as drought in developing countries. STEM activities encourage students to think ‘outside the box’, work in teams and investigate their surroundings.

Prescriptive STEM competitions/ interactions September 2018 AWE came in to deliver pre lesson to students taking part in the challenge in October.  All set one in year 9 had a lesson on buoyancy, hydrodynamics and aerodynamics October 2018 AWE engineering day.  4 year 9 students entered the competition against other schools to build a submarine. …

The Careers Department arranged a trip to Chessington World of Adventure.  During this visit the focus and main activities were  interactive talks delivered by members of staff from around the resort including but not limited to Zookeepers, Engineers, Ride operators, Marketing and Hospitality Officers.  The members of staff gave talks about what their job involves, the path they …

Posted in STEM | Comments Off on October 2017

We have 4 Year 9 students attended Royal Institute Master Classes run by AWE. These were aimed at students to extend their knowledge past the curriculum, looking at team based tasks on a variety of different topics. One of our students Abitha N was in the winning group. As part of the prize she got a …

BP Challenge- The year 9 STEM club entered this year’s STEM challenge. 3 teams worked on the challenge of making rockets, looking at how different shapes and amounts of water could affect the trajectory of the rocket.

Posted in STEM | Comments Off on January 2017

Tech future girls, run by the Tech partnership. It is specially aimed at girls to encourage them to maintain their interest in ICT by offering activities to appeal to them such as environment, security, crime solving, music, fashion and energy. We have 12 year 7s involved in this project and they are currently planning, designing …

Posted in STEM | Comments Off on December 2016

STEM club for year 8, approximately 10 students from a range of sets. Looking at investigations on a variety of topics including antacids and water rockets. We will be using this to complete a bronze CREST award later this year.

Posted in STEM | Comments Off on October 2016 – ongoing

Year 9 STEM club – entering the BP challenge to look at how to develop rockets with the purpose of rescue missions.

Bronze CREST award – a group of year 7’s in STEM club gained their Bronze CREST award. They completed a project looking at the science of chocolate. They investigated the properties of dark, white and milk chocolate. Alongside this they looked at the packaging for chocolate and why this makes a difference.

ENI engineering – A week’s work experience for five Year 10 students. They worked with an engineering based company based in Basingstoke which make oil pipe lines and designed a boat that could take up oil and deliver it to another ship.

Teentech – We took a team of year 9’s to the Basingstoke event. They took part in several challenges including looking at how banks ensure cyber security. The students also had time to discuss working in scientific areas, such as chemical engineering and biotechnology.

Bright Ideas Challenge by Shell. Year 7’s in the school looked into the challenge of what we will do when the fossil fuels run out. They came up with many inventive ways of limiting the amount of energy we use, conservation of water and ways to generate eco-friendly energy.

Airkick – a group of year 8 & 9 went to the local indoor sky diving centre. They learnt about the forces that are involved in sky diving and how wing suits work. All the students (and staff) also had a go at the sky diving, putting their scientific knowledge into practise.

Harper Adams University – Design your own robot. This was opened up to year 8 students. They designed robots to carry out all manner of tasks, explaining how they work and the benefits they would have to society.

Microbiology in school’s advisory committee – How microbes work for us. We entered this national competition where the students looked at the role of beneficial microbes, as well as those which are harmful to us. Each school was allowed 8 entrants.

Go from set – A design and make project with an engineer that came in and visited to helped the students with their designs. The students then went back and presented their work in Southampton. This project was with 15 Year 9 students.

Posted in STEM | Comments Off on January to March 2015
This website uses cookies. By continuing to browse the site, you are agreeing to our use of cookies
Scroll to Top